Posted on March 1, 2013 by carlsimmonslive

As it was with our last entry (and for much the same reasons), I’ve been a fan of Paul Ford’s approach to ministry for nigh on a decade now. In fact, I’ll go one further and mention that his resource Unleash Your Church was a huge influence upon my own Season 3 in the Growing Out series, Growing in Your Gifts.

And here’s why: While other spiritual-gift resources were equally or at least comparably good in assessing spiritual gifts, they seemed far more concerned with plugging holes in existing church ministry than in exercising those gifts where the rest of the world could actually see them—let alone as a catalyst for new ministry. Unleash Your Church, as its title suggests, was outwardly (and yes, missionally) focused from the get-go, and that made all the difference—to me, and undoubtedly to others as well.

This new book, in comparison, is more of a manifesto than a ministry tool—although it’s plenty of the latter as well. 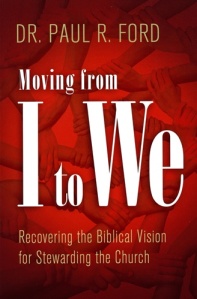 Dr. Paul Ford. Moving from I to We: Recovering the Biblical Vision for Stewarding the Church. 320p., $16.99, NavPress/ChurchSmart Resources.

The problem is stated outright in the introduction: “Today more than ever, young and midcareer leaders want to become ‘great Kingdom leaders’ rather than focus on equipping and releasing the body for the ministry of multiplication.” And thus the opening section, “Ezekiel’s Vision of We,” takes on the current paradigms of church leadership and ministry through the lens of Ezekiel 34—37 (during which, you might recall, God rebukes the “false shepherds” of Ezekiel’s time, as well as revives the dry bones via the Spirit). The problem becomes vividly clear during the author’s visit to Uganda:

I experienced a vision from the Lord unlike anything before in my life…. I looked to the back of the long sanctuary. I could see the legs of the body of Jesus, stretched out at the back of this jammed worship center. The people were His legs. I could see the arms of His body reaching out. The people were His arms. Then I realized that I was standing in front of the people. I looked as if I was the head of Jesus’ body….

It was difficult at first to grasp God’s intent. Then it became clear: Because of where I was standing, the people were confused about who was—and is—the head of the Church. In this vision, I wanted to yell out, “People, I am not the head of Jesus’ body. I am not the leader of His Church. He is!” Then, very quietly as I continued speaking to the body gathered, the Lord said ever so clearly to me, “Now you understand the problem.”

Throughout the book, Ford exhorts us—especially leaders—to truly act like a body of believers. In Part 2, “Royally Getting Off Track,” he explores three “cults” especially prominent today—rightness, a craving for the spotlight, and strategies and tactics—that we tend to substitute for allowing Christ Himself to be the head of the Church. Put another way here: “The impact of individualism and the related sense of entitlement and dissatisfaction of Christians in the West is disturbingly real.”

The third and final section, “Body-Life Leadership Applied,” moves toward solutions, and is built around a different set of  spiritual roles than we’re used to seeing: active listener, team builder, equipping releaser, values keeper, and vision sharer.  That said, these tie in very strongly to the traditional classifications of spiritual gifts found in the Bible and elsewhere; you’ll just have to read the book to discover how. One quote in that section about releasing people into ministry—and the spiritual promises pregnant within that—captures the goal and the process well:

When I see someone who can powerfully do what I do at a 65 to 70 percent level, I prepare to let go part or all of those functions to free that person to use his or her gifts. Whenever I release in this way, God always—I repeat, always—opens up another relationship or context where I can steward anew my gifts. God will keep building His ‘building’ as long as we equip and release, equip and release, equip…. He is the ultimate body-builder and body-extender.

Likewise, the application steps and discussion questions at the end of each chapter are thoroughly useful in helping groups and ministries become more relational and interdependent, both within ministry and outside the church walls.

In short, Moving from I to We is a great tool for putting the life of the body of Christ—and its headship—back where it belongs.

See the About Me page, if you want to know more about ME. Otherwise, hopefully you'll know more about Jesus and some of his followers by reading here. And thanks for stopping by.
View all posts by carlsimmonslive →
This entry was posted in Uncategorized and tagged body of Christ, book review, churchsmart resources, equipping for ministry, paul ford, releasing people into leadership, spiritual gift resources, spiritual gifts. Bookmark the permalink.